Iraq and a Hard Place

“Did you know you can still get commercial flights into Iraq, and that the politically correct way to land an airplane in Baghdad ends with a flush – an extremely steep, spiral descent from 15,000 feet directly over the airport so not to attract gunfire? We flew Royal Jordanian Airlines so ours was a Royal Flush! Welcome to Iraq.”

Saddam Hussein has been captured, tried and executed, yet the war continues. Along with others, General David Petraeus convinced George W. Bush to send an additional 30,000 troops (clear and hold) plus hundreds of contractors (build) to Iraq in early 2007 as a surge effort toward a conflict and political resolution. Still today, the effectiveness of the surge is debated. I was one of the additional civilian contractors sent to Iraq in 2007 to help with the build portion toward peace. Written in Iraq between April, 2007, and March, 2008, Iraq and a Hard Place is a memoir of my evolving role and experiences throughout this period. Writing was the way to keep my sanity and inform friends about the war in a way not told in the press.

Iraq and a Hard Place is an easy read. Its 161 pages are a compilation of weekly reports of my project, my personal experiences and my observations of the country, her people and the region. The book can be found in Bear Pond Books in Stowe in the Local Authors section. One copy is also available at Stowe Free Library.  Or you can email me to purchase a copy. 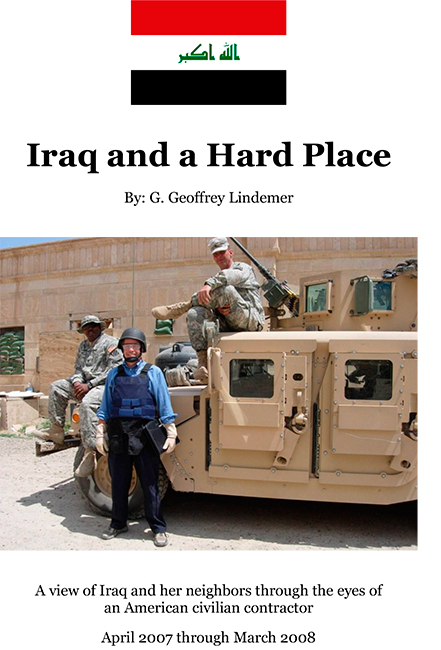